Australia’s paleogeography since the Jurassic

This model combines dynamic (mantle-driven) and tectonic topography across the Australian continent with global sea level change and surface processes since the late Triassic to understand the main driving factors of uplift, subsidence, erosion and coastline migration 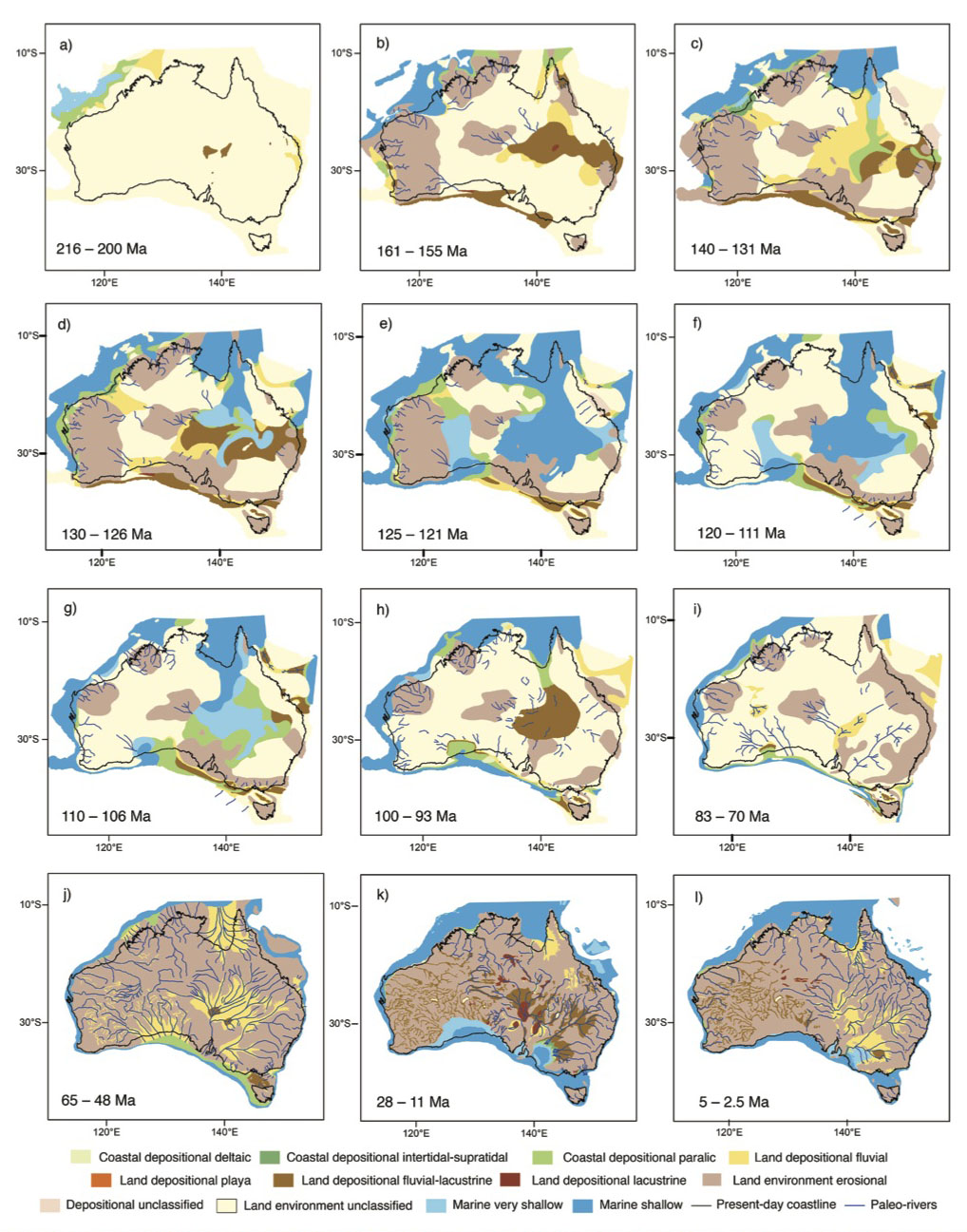 Plate tectonic reconstructions This study coupled global plate tectonic reconstructions provided by Müller et al. (2016) with mantle flow experiments to model the evolving mantle structure for the post-Pangea timeframe. In addition to incorporating relative motion between plates, the tectonic reconstructions presented here use a hybrid absolute reference frame based on a moving hotspot model from Torsvik et al. (2008) from 0–70 Ma, and a true polar wander corrected paleomagnetic model from Steinberger & Torsvik (2008) for older times, allowing for a 35 Myr transition period (70–105 Ma) from one reference frame to the other (Müller et al., 2016). A key feature of these plate reconstructions is the algorithm that generates time-evolving and topologically-closed plate polygons (Gurnis et al., 2012). These global plate topologies were used to sample the plate velocity field, which was imposed on the surface of the global mantle flow experiments (Gurnis et al., 2012). 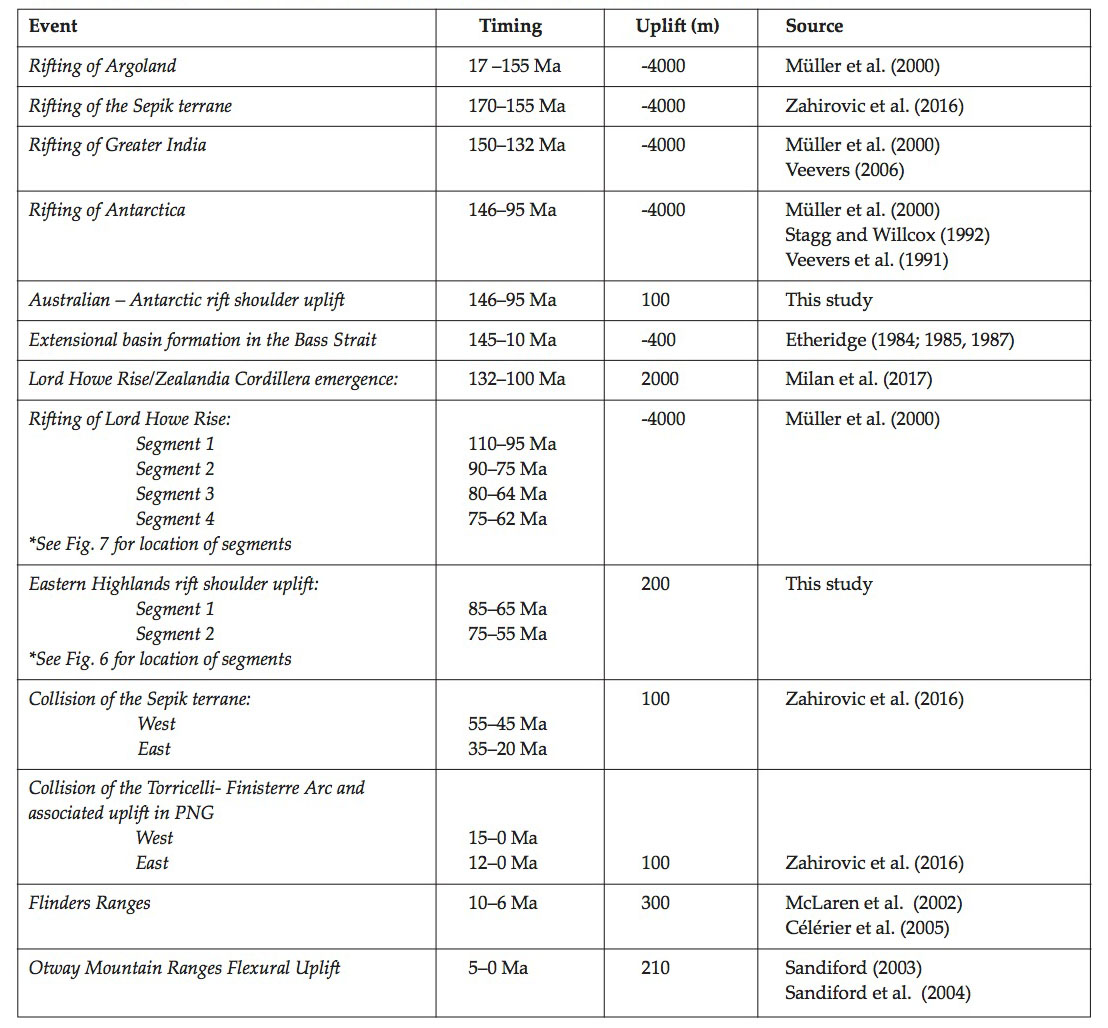 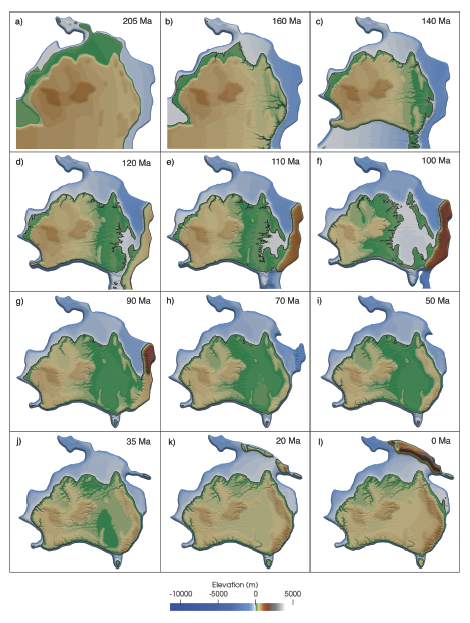 The preferred models achieve their primary aims of reproducing the northern drainage of Australia’s epicontinental sea through the Gulf of Carpentaria into the (proto) Pacific Ocean during the Cretaceous, as well as the southern drainage of the Murray-Darling Basin at present-day. This was achieved by careful selection of suitable dynamic topography models as boundary conditions, fine-tuning regional erodibility and through the inclusion of an Australia-Antarctic rift shoulder during the Cretaceous. In this regard, these models achieve first-order success, building on the work of Salles et al. (2017) and earlier paleogeographic reconstructions of the Australian continent (Gurnis et al., 1998; Norvick, 2003; Struckmeyer et al., 1990). Additionally, this work provides new insights into the elevation of western Australia during the early Mesozoic. Due to the proximity of western Australia to the African mantle superswell at this time, our models suggest that the region experienced a broad increase in elevation.